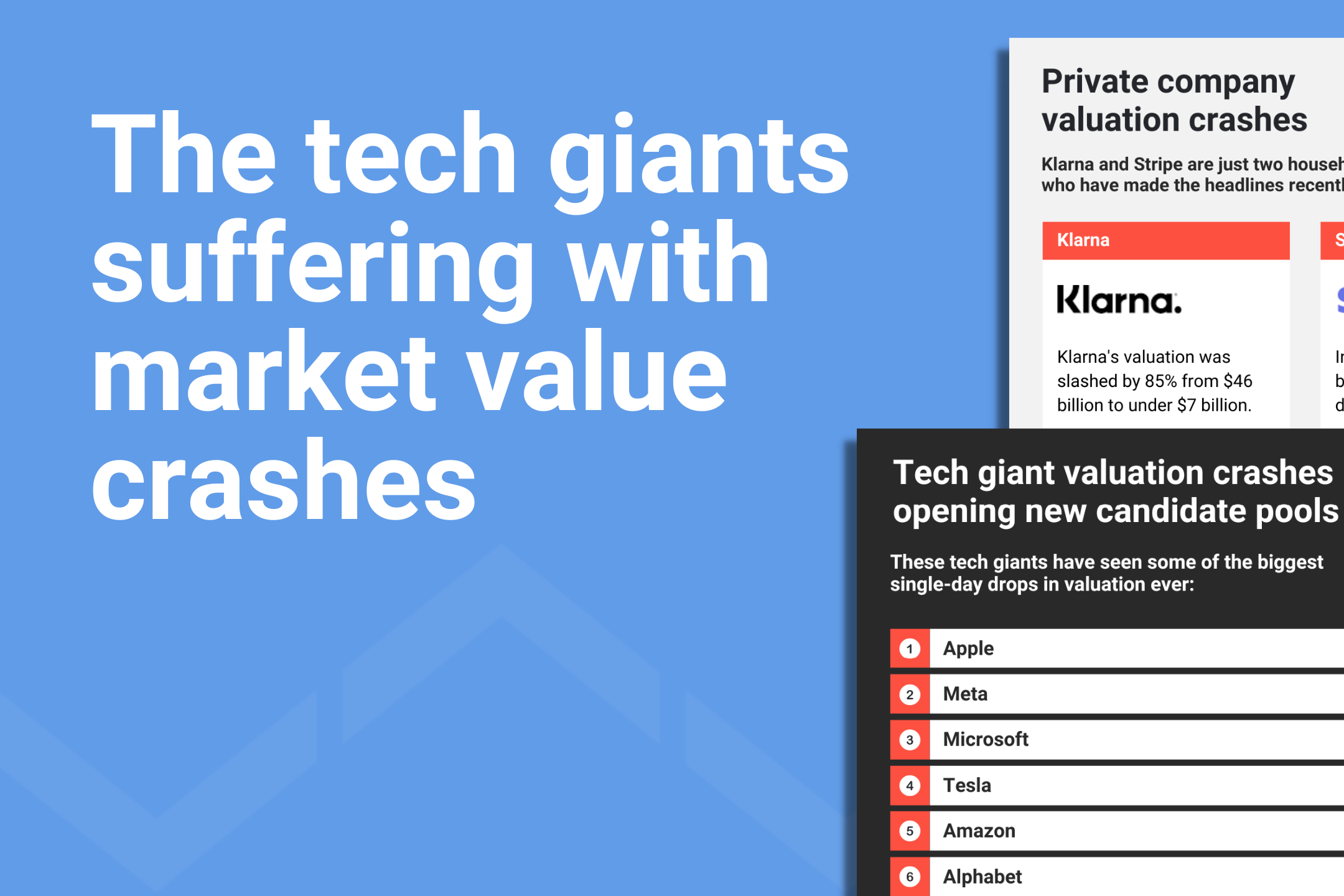 Whether or not we’re heading towards a global recession, there is no doubt that fears of such an event are causing a tidal wave of layoff activity in the technology sector. In fact, in the last six months we’ve seen some of the world’s biggest and most influential companies struggle in the light of high inflation, rising interest rates, and ongoing fears surrounding the Russian and Ukranian war.

But it’s not just the underdogs or SMEs that are being hit hard by recent events. 2022 has seen some of the world’s biggest and most successful companies take a battering on the stock market. The end of 2021 saw investors start to turn away from the technology sector, and the first half of 2022 has shown us all how big an impact that has had.

Selligence has taken a look at some of the tech giants to see how they’ve been coping over the last few months:

Once the most valuable publicly traded company, being the first to hit a market valuation of $3 trillion, Apple has seen its share value crash this year by 20% from $182 in January 2022, despite reporting an all-time revenue record. With something of a pullback in Apple stock, the company’s year-to-date figures are still looking reasonably healthy and its stock most recently received a consensus ‘moderate buy’.

‍Making history for all the wrong reasons, in February of this year Meta’s valuation plummeted by more than most public companies are even worth, almost $232 billion in one day of trading. Making history, it was the US stock market’s biggest ever one-day drop in value. Although no layoffs have been formally announced, managers have been instructed to “move to exit” their poor performers. Meta have also announced that they are expecting to reduce their engineering team by 30% by the end of the year.

Yet another giant suffering through turbulent times. Microsoft stock has lost approximately 26% year to date. At its current price of $244 per share, it is also trading 32% below its value of $360 per share. Microsoft have also recently announce their ‘realignment’, in which a limited number of roles have been cut (less than 1% of their 180,000+ headcount), in an attempt to help improve forecasting and quarterly figures.

Having been in the headlines for laying off hundreds of its employees, and closing down its San Mateo office, it may surprise you that Tesla’s gross profit margins are better than its industry peers. Market value dropped substantially early in 2022 (wiping out $100 billion of market value in one day), Tesla stock has made a modest come back. Analysts are looking hopeful for Tesla though, so it could be back on the road to recovery soon.

‍While stock prices rocketed in 2020 and 2021 with the surge of e-commerce in the light of the pandemic, Amazon has still felt the crush from a wider market sell-off with over $150 billion wiped out in value. Having announced a stock split, Amazon shares saw an immediate increase of 17%. While a split doesn’t actually affect a valuation, it has bought Amazon investors a bit of breathing space. Looking to defy the job cuts pattern, Amazon have just announced plans to invest in retaining, developing, and growing their headcount, supporting roles in their engineering team, central offices, and in their new fulfilment centres set to open in Wakefield and Knowsley.

‍Google’s umbrella company is another to have seen over a 20% drop in company valuation. However, the company’s revenue rose 23% year-on-year in the first quarter of 2022, while its core earnings rose 24%, being one of the few companies who actually managed to benefit from the pandemic and the change in consumer needs. This week though, their stock has dropped from $2,200 to $110 (95% of its value) in direct result of their stock split. The split is to encourage higher trading volume while making access to Alphabet stocks more affordable, but it’s not without risk.‍

‍Another to report an all-time low in company valuation, PayPal reported mixed fourth quarter results and a weak earnings guidance, lower than expected for 2022, which led to investors dropping shares at an alarming rate. PayPal is down 63% year to date, stock prices falling 18% in June alone. Layoffs have recently been announced, with many jobs being cut in risk management and operations. With eBay also transitioning to its own payment platform, it looks like it will be a tough year for PayPal.

The decline in public market valuations has filtered through to private companies too. Over the last couple of weeks, we’ve heard stories of household name fintech’s also feeling the crunch:

Once Europe’s most valuable privately owned tech company has just seen its valuation slashed by 85%. Following its recent $800 million funding round, Klarna reported a drop in valuation, from $46 billion to under $7 billion. In May, the firm announced its first large-scale job cutting exercise in which 10% of its headcount, 700 employees, were laid off. A number of roles including software engineer, product manager, analyst and UX researcher took the brunt of this scale-back. Why the plunge in valuation then? Simply, investors now are voting differently to how they did the last few years – well, that and a few changes to the “buy now, pay later” market, have made things increasingly difficult for them.

The latest victim of tech cutbacks, has just revealed to its employees that its internal share price has been valued at just $29, down from $40. It is now understood that the company’s $95 billion valuation (making it the fifth most valuable privately owned technology company in the world) has dropped to $74 billion, a 28% valuation cut. Stripe had been expecting to go public this year, but with the economic climate as it is, this now seems unlikely.

While a change to the internal valuation of a company doesn’t necessarily suggest anything about the strength of the business, the valuation is something that is keenly watched.

Even the tech giants aren’t immune to the extenuating circumstances the world is facing, but the good news is, even a pandemic and fallout from the Russian/Ukrainian war won’t stop some of these companies from developing. While we have seen some horrific valuation crashes, some companies are still seeing record growth in parts of their business.

What’s important to remember is that once the tide seems to turn, stock prices will start to increase again, and these companies will turn back to focus more proactively on growth. Department spend and hiring may be on a freeze, but it won’t be forever. Keep watching the market and you’ll soon be ready to reach out as these companies find their position back on safe ground.

Find out what else we can do

Interested in seeing how you can get lists like these delivered to your inbox? Book a quick 15-minute call with our team to see how you can spend less time doing business development and get more time to build stronger relationships with your contacts.

We’ll even pass along some free leads for your time. Book your demo today.