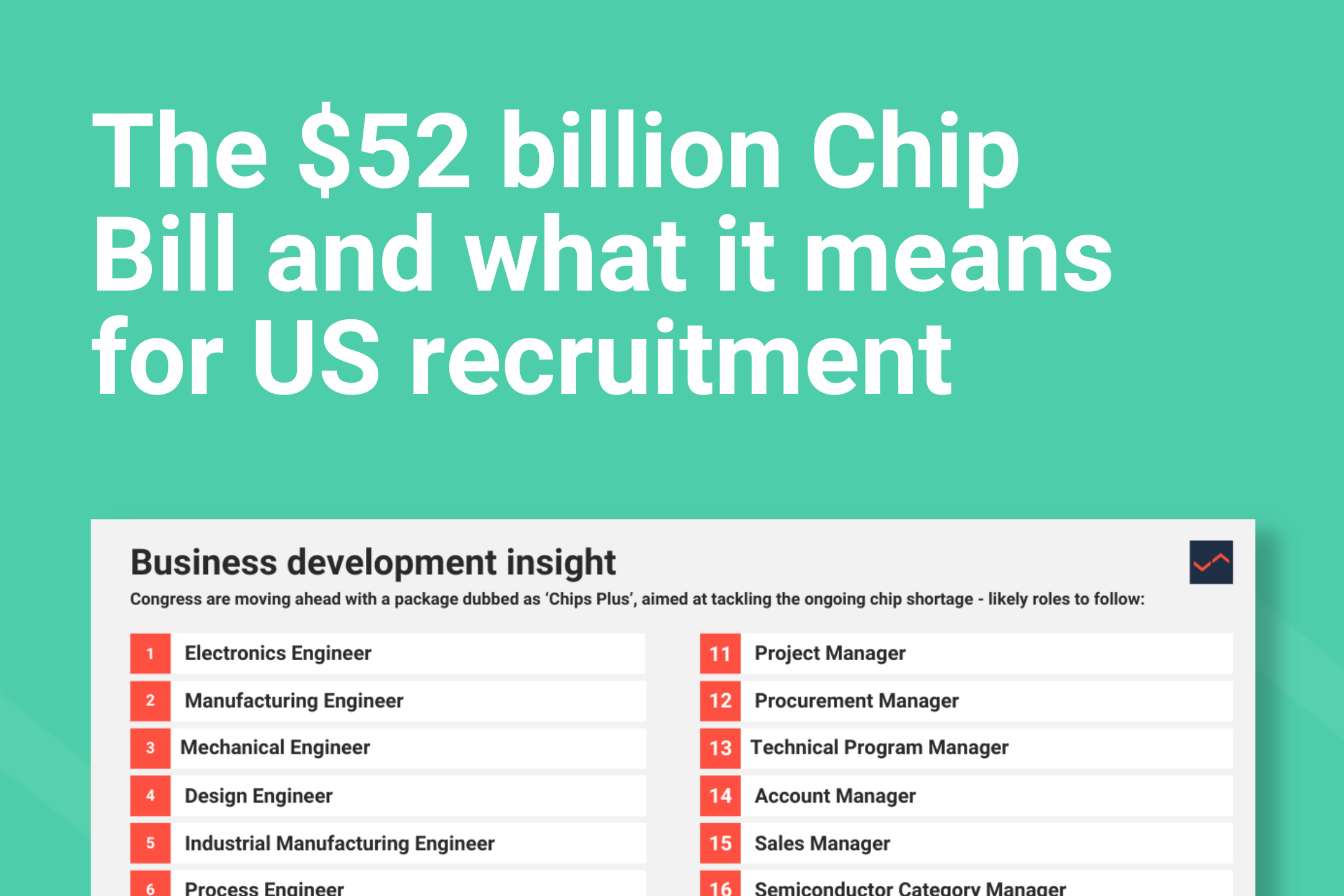 Talent Ticker knows that one industry is about to be super charged. Senators at Congress this week are moving ahead with a package dubbed as ‘Chips Plus’, aimed at tackling the ongoing chip shortage. The $52 billion bill is part of a movement to compete with Chinese chip production. With the inclusion of subsidies for US semiconductor companies and a four-year 25% tax credit which aims to promote companies building manufacturing plants in the US, this is no small feat.

McKinsey & Company stated this year that the semiconductor industry is about to have a decade of growth and will become a trillion-dollar industry by 2030. China has already unveiled two semiconductor initiatives in the last few years, with Made In China 2025 released with the goal to reduce dependency on international suppliers. Emphasis has been put on the bill being a matter of national security, with Secretary of Commerce Gina Raimondo telling the White House that US “dependence… for chips is untenable and unsafe”.

CEO Pat Gelsinger at Intel has said that this governmental funding will dramatically speed the rate at which they’re able to construct their planned $100 billion chip fabrication plant in Ohio. Likewise, Samsung Electronics is said to build 11 chip plants worth $200 billion in Texas over the next two decades, creating 2000+ jobs.

Intel and Samsung Electronics are highly likely to not be alone in benefitting from this bill, though. Firms Texas Instruments and Micron Technology Inc design and manufacture their own chips, whilst chip developers like Qualcomm will not be eligible for subsidies as they do not make their physical products. Talent Ticker reported a 67% chance of large scale hiring in Sherman back in May, following Texas Instruments’ announcement to build a new 300-millimeter semiconductor wafer manufacturing facility.

Changes in this industry have also been felt in the UK, with Cambridge team Nyobolt raising £50m in a Series B funding round last week. This follows the block on the University of Manchester’s sale of computer-vision technology to Chinese company Beijing Infinite Vision Technology under the National Security and Investment Act, which has given the government the power to stop deals since January.

We anticipate hiring on the horizon as this bill passes into law and companies start to plan further facilities in the US. This semiconductor bill process will affect a number of industries, in the development of car, phone and computer parts, to AI, predictive intelligence and security production. Roles are likely to be largely centered in construction, engineering, and manufacturing. You’re in luck – our predictive intelligence has already complied 20 roles, so you can get a head start on the competition:

Here at Talent Ticker, we expect to see immediate hiring. Don’t want to miss out? Reach out for a demo of our platform and see just how much Talent Ticker can do for you. Get your Hopin Talent Souring list with 240+ candidates, read all about our predictions for your next A1 candidate Boris Johnson and keep in the loop with the top skills looked for in today’s candidates.