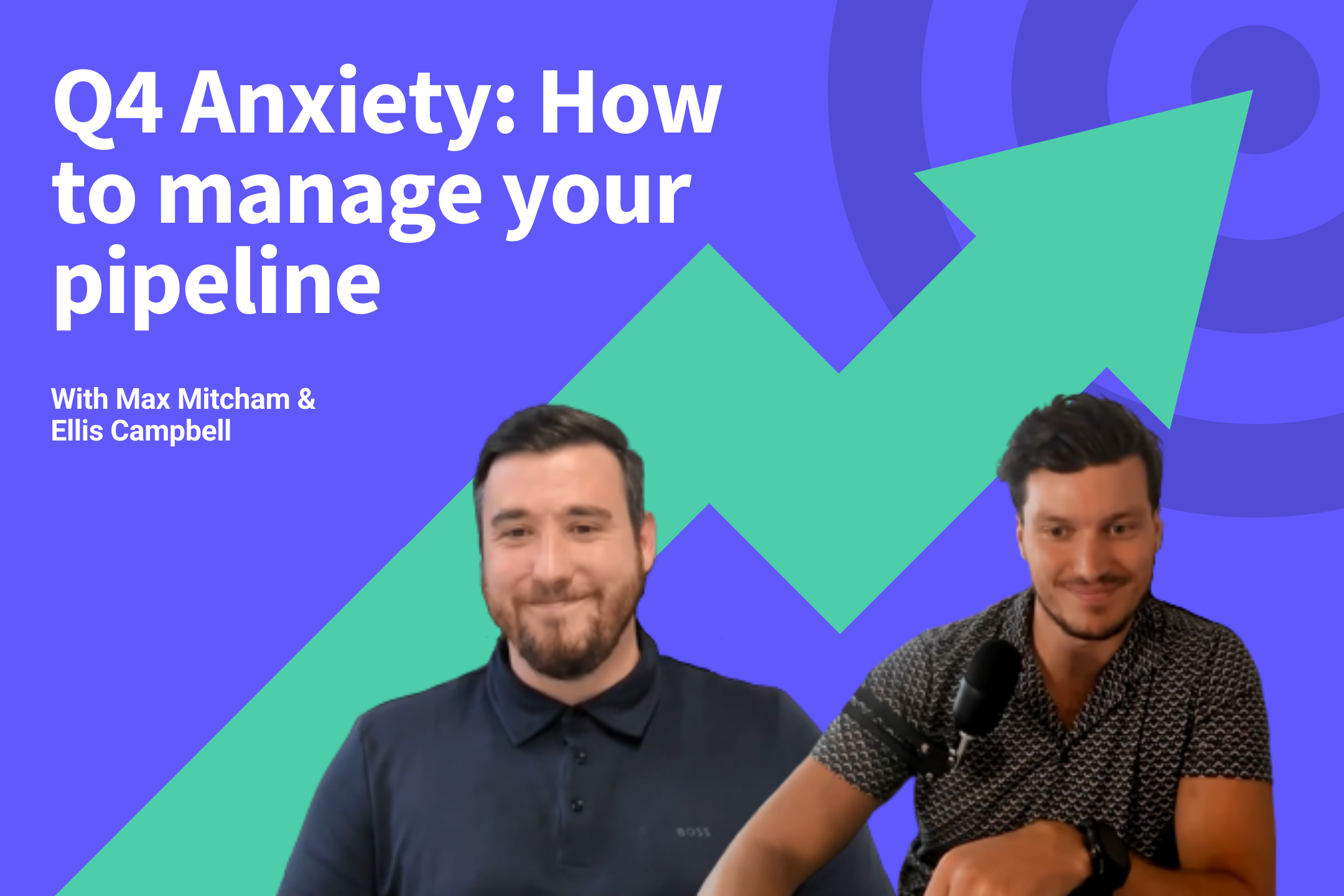 How to manage your pipeline amid Q4 anxieties

Approaching the end of the year is often a difficult time for anyone in sales. With both quarterly and annual target deadlines fast approaching, it’s easy to see why many sales professionals start to feel really bogged down as we hit November and December. So, what are the real issues that are challenging sales individuals today?

This week on Selligence’s Sales Syndicate Podcast, we spoke with Ellis Campbell, Head of Enterprise at Selligence, to get his thoughts, as well as some hints and tips to help you power through to the end of the year, all while avoiding the fourth-quarter blues.

Campbell, having worked at a range of sales companies, started out as an Account Manager, before working his way through the ranks from Senior Account Manager to Global Account Manager, and eventually onto Head of Enterprise, having managed a wide range of different accounts globally.

‍How does your year run?

A big factor to consider is how your financial year runs. Does your company work to a calendar year or a tax year? Many companies will operate on the calendar year, meaning your fourth quarter coincides with the Christmas and New Year period. With a lot of annual leave booked for this time of year, December then becomes a very hard month to try and grind and finish on a high; it’s very difficult having to make up for any gap in the Christmas period, particularly when this can amount to almost half of the month.

If your financial year ends early in the next calendar year, there is at least some breathing space that you can normally benefit from. Not only do you have a bit more time to make up for any Christmas deficit, but there’s often new budget available too and prospects have loosened the purse strings and are ready to spend again.

Campbell, when talking about his own experiences of fourth quarter struggles, recalled: “I’ve had Q4s where I’ve absolutely smashed it, managed to catch up with my yearly target and carry me over, and carry the floor over. I’ve had Q4s where it’s been coming up around the Christmas time, my two key decision makers for my largest deal are taking annual leave, and unfortunately, I was too solely reliant on one or two opportunities, and I’ve ended up narrowly missing target.”

What is it that makes the calendar-year fourth quarter harder than any other quarter? Ultimately, it’s us. Not just us, perhaps, but it’s the human element. We are conscious of the fact that it is a shorter working month and so put additional pressures on ourselves. We still want to hit the same target we would set ourselves for a four- or five-week month, even though most offices and companies shut down between Christmas and New Year, and some even take Christmas week off too. So effectively, we’re trying to cram a normal month’s work into half the usual time we’d normally allow ourselves. Of course, it’s going to feel more pressured!

But we’re not the only ones putting extra pressure on ourselves. According to Campbell, “companies also add that pressure on, so that when you look at promotions, when you look at extra incentives, it’s all geared towards that year and annual number… When you’re in Q4, you know that sometimes hitting that target can be the difference between you having a large amount of commission or could be the next progression or the next promotion”.

Ultimately, the end of the calendar year is always going to be pressured. We all must report back to someone on how the year has gone, and therefore how the last month, or three, have also gone. What we need to realise though, is much of the work we should be looking to accomplish towards the end of the calendar year doesn’t actually take place then.

For Campbell, “Q4 is representative of the work you’ve done in Q2 or Q3. If I’m trying to find and net new opportunities in Q4, to try and close out in that quarter, I think you’ve sort of missed a trick. You’re going to be struggling because trying to close the fresh new opportunities out in and around Christmas time is this difficult and it puts a lot more pressure in yourself.”

Christmas is a notoriously difficult time to close deals. However, you can also use the festive break to help drive the close too. Outline to your client that you’ll both be away from your desks for weeks over the holidays – and highlight the importance of getting the deal signed and sealed now. After all, you want to be able to go back to your desk at the start of the year and be able to hit the ground running. So, get sign-off before the holidays and use the Christmas period as a closing tactic. In the face of a couple of quiet weeks, your prospect will be desperate for anything that will provide the benefit of starting the new year at high speed.

It’s not just Christmas that can cause fourth quarter problems. In fact, from Thanksgiving (the fourth Thursday in November in the US) onwards, you’ll probably be aware that prospects are slightly less engaged, less willing to talk, and generally more concerned with other things that they themselves are looking to close out before the end of the year. To avoid any downtime in this period you’ll need to make sure your pipeline is loaded with potential for the coming months.

Use the third quarter for a big focus on business development (BD). You’ll need to have your finger on the button with some predictive leads and future market triggers to keep yourself ahead of the competition and make sure that you’ve done your homework before you hit the trickiest time of year. Start building those relationships early, get to know who the decision makers are – and bring them in on demos, know your prospects’ procurement and onboarding processes. Then, when it’s time to close, you’ve got good rapport, thorough research, and time (and a timeframe to work to) on your side. Nobody likes to feel pushed into a decision too soon, particularly if they’re aware of their own fourth quarter pressures, so start working on these deals early to make the process a lot more comfortable all around.

It’s not impossible to dig out new leads and push them through on a tight sales cycle, but if you don’t need to resort to this, then you can save yourself some of that unnecessary pressure. Avoiding last minute BD can also stand you in better stead for long-term success. With deadlines fast approaching, temptation will be to try and push deals through at a pace you wouldn’t normally. This can actually cost you a deal (and damage a relationship), rather than being the saving grace you are looking for.

There is a psychology behind what’s happening at this time of year that we need to consider too. November is typically the month that people start thinking about spending for Christmas. People are buying things for their loved ones, Christmas presents, food for the holidays; everyone is in more of a spending mood. So, when it comes to the deal that you thought would be closing in January, sometimes your contacts are just more closed off and stalling because you’ve missed them while they’ve been in that spending mode.

Most of the budget decisions for the new year will have been made in November or December the previous year. The conversations you’re having will need to acknowledge this. Find out if you’ve been considered and included in their budgeting. Do they still have budget from this year, but won’t be able to onboard until January? If you have been included in the budget, you can possibly still get your contract signed in December, with a go-live date for January. But you need to be asking the questions that allow you to plan and work around any restrictions. Understanding their situation will help you decide whether to push hard for a December sign-off, or help you acknowledge that this deal isn’t going to be a reality this year anyway, allowing you to move on.

Sometimes, it’s the concerns or objections that hold a prospect back. If you’re asking what their concerns are, you can help solve them, or counteract them if it’s a stalling method. To understand a perspective behind an objection, it is necessary to dig in and really get to the bottom of their hesitation. If you ask the questions, you can then challenge the perception, address any queries, and help iron out any concerns that could be roadblocks further down the sale process.

It’s not too late to act now. Here we are, well and truly into the final stretch of the year, and you may be realising now that your third quarter perhaps wasn’t as BD focussed as it could (or should) have been. We already know that closing deals this time of year is getting harder, but that’s not to say they can’t be closed. You’ll need to assess where you’ve had success on a shorter sales cycle previously and use that to identify some new opportunities where you can replicate this process.

We’re often tempted to chase the larger, strategic opportunities, but if you’re looking for new leads, now is the time to start looking at some smaller opportunities that are more likely to be able to work on a shorter sales cycle. Use this as an opportunity to revisit old contacts too; if you’ve already got rapport, done the legwork in a previous quarter, but maybe timing just wasn’t right before, then it’s worth trying again now. A few months can make a world of difference: new problems or pinch points may have arisen for the prospect and now your offering could be more relevant. It’s in these instances that a shorter sales cycle could come into play, winning you some last-minute deals.

For Campbell, this really boils down to three major things: ask the questions you don’t want to know the answers to, use transparency to inspire trust and motivate decision-makers, and don’t forget to check your top of funnel. Shying away from certain questions really only fools yourself, so bite the bullet and ask what you need to know from the offset. Once you have your answers you can plan accordingly, one way or another. By being clear about your own needs and timeframe, you’re more likely to get your contact on side.

Whether or not you close out the deal before Christmas, at least you know you’re both singing from the same song sheet, which will keep things running smoothly. And finally, don’t forget those smaller deals still in your funnel. Sometimes the smaller deals will close out quicker, particularly if it’s someone you’ve had on the back burner or who’s shown previous interest. Reach out to them now, show you’re still relevant, answer their concerns, and that old contact might just be the extra Christmas present that takes you to target.